On this page, we present an overview of each of The 2 Blokes and their experience in radio and in life.

Rob Cameron - one of The 2 Blokes 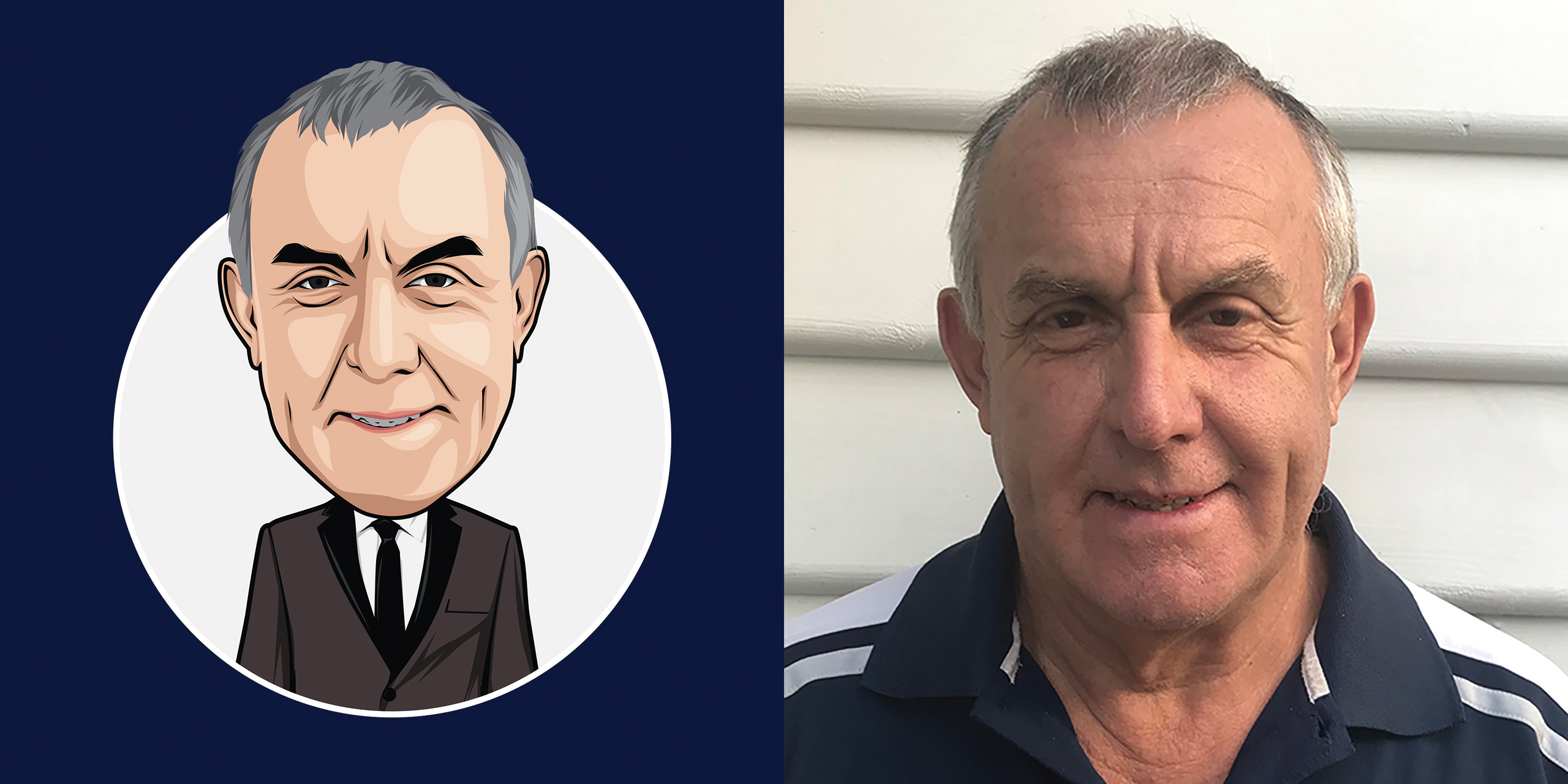 Robert Cameron was born into a farming family at Wurdi Boluc, which is more of an area than a town, famous for the large Barwon Water Reservoir that supplies the South Western suburbs of Geelong. Rob enjoyed a wonderful childhood with so much fun and activity on limited resources, but with a 365 acre playground.
Raised as one of 8 children and, in the final year of primary school at the now defunct Wurdi Boluc Primary School, Rob was one of only eleven students, along with his two younger sisters. Secondary education was completed at Geelong Technical School and then straight home into agricultural pursuits, including how to shear sheep.
At the age of 30, Rob was introduced to amateur theatre and, at 33, he was given an opportunity to work in sales. Both of these changes had a significant impact on his life, providing confidence and opening doors that he had never thought possible.
While living in Keith in South Australia in 2012, Rob answered an advertisement for volunteer presenters at a community radio station (5TCB) in nearby Bordertown, inheriting a Saturday morning sport show. That led to calling local football matches on 5TCB and interviewing some very high profile sporting identities. Almost immediately, he became hooked on the medium and upon returning to Geelong in 2015, Rob was able to continue his passion at 94.7 The Pulse.
On the back of those football broadcasting experiences, Rob has subsequently called VFL and VFLW matches on goFooty.Live and GDFL matches on The Pulse.
Apart from co-hosting The 2 Blokes Chatting Radio Show with Neil and hosting Sportsfix, both on Saturday mornings, Rob has most recently started hosting Rob Cameron’s Front Page on Monday and Tuesday mornings. Interviewing people from all walks of life is Rob's favourite part of the job.

While involved in cricket administration, Rob was given the opportunity to write articles for the local newspaper, detailing the weekend games on a voluntary basis. This gave him an enormous amount of experience and enjoyment which Rob continues to do now for the Geelong and District Football and Netball League (GDFNL) and the Bellarine Peninsula Cricket Association (BPCA). He also provides regular feature articles on sporting identities within the competitions.

Rob's written articles are published regularly through a variety of channels including the Geelong Advertiser, the GDFNL Football Record and the GDFNL and BPCA web sites.

Rob is also in high demand as a Master of Ceremonies at many sporting functions and presentation evenings in and around Geelong, highlighted by six years at the Winchelsea Sportsperson of the Year and awards events for the Geelong and District Football and Netball League and Geelong Cricket Club.

Neil Butler - the other Bloke

Neil Butler has had a fascination with radio since childhood with his earliest radio memories being the 3KZ breakfast show in Melbourne in the late 1960s. Instead of following his dream to be a radio presenter, he became a school teacher, working in secondary schools in both regional Victoria and metropolitan Melbourne. After teaching for a few years, he stepped out into the commercial world, working with a couple of large multi-nationals and a number of smaller businesses along the way.

His first real opportunity to get involved in radio occurred on New Years Eve 2007 when he was invited to co-host a NYE program with his daughter on local community station 3WBC in Box Hill, Victoria. That eventually led to a monthly music program (Radio Ga Ga) and the opportunity to host and call football matches with the 3WBC VFL / VFLW Commentary team.

After relocating to Geelong in regional Victoria, he was given the opportunity to present a weekly music program (Turn Up Your Radio) on 94.7 The Pulse featuring music of the 60s, 70s, 80s and 90s during the non-football months and to continue his involvement with VFL and VFLW commentary for the remainder of the year.

In 2018, Neil established his own online radio station (Turn Back Time Radio) which plays music from the past 70 years on an automated schedule. During COVID lockdowns, he was able to present a two-hour breakfast program five days per week and a weekly themed music program every Friday night.

With the changes in VFL and VFLW scheduling, Neil has been unable to continue with his football broadcasts, hanging up that microphone after more than 175 games. This has given him the opportunity to focus on The 2 Blokes Chatting Radio Show and his new-found passion for podcasting.

Neil has established a podcasting business called Podversations which focuses on developing conversational podcasts for a number of organisations and covering a range of topics, primarily focused on regional Australia.

In his professional life, Neil continues to work with businesses of all shapes and sizes with a focus on business transformation and change. On the home front, Neil is the proud father of Lucy and Sam, father-in-law of Ash and, most recently Pop to Maverick. He continues to maintain a 40-year continuous membership of the Brisbane Lions (and Fitzroy prior to 1997) and enjoys drinking great coffee and red wine.